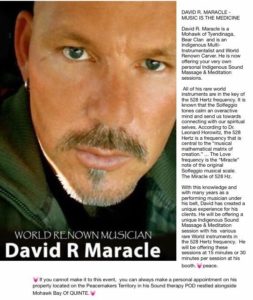 David R. Maracle has been crafting his artistry since 1985, from the Tyendinaga Mohawk Territory, bringing to life the ancestral teachings of the Haudenosaunee People’s ways of life into his magnificent Stone Carvings. With every piece being unique, one-of-a-kind pieces, he has sold his carvings to many corporations, and private collectors alike, with that of the Estate of the Late Nelson Mandela owning a piece of his work, The Emperor of Japan, and many other famous collectors. His work has been featured on cheques across Canada, and has helped to encourage Indigenous Youth across the country to follow their dreams with their gifts they have within them.

When David was not carving and in his studio making these masterpieces….He turned to another career in the form of meditation.

Not only a World Renown Sculptor of Stone, David has released over 17 Musical compilations and albums over the last 18 years. David has received two Gold Records from the Recording Industry RIAA, for his world ambient sounds of the Iroquoian Flute, and Multi-Instrumental fusion of sounds, with rare world instruments that he has mastered over the last 18 years. He has also won various Canadian Aboriginal Music awards as well over his wonderful Musical career. He has performed his beautiful ambient music all over the world, including recently Austria, and Pakistan, at the Olympics in Australia and to the Queen in Parliament.

Listen to samples below!

Listen to a sample here: